Running Alongside his Students

The great thing about blogposts is that they can sometimes be a slow burn (Paul Kelly reputedly took years to write To her Door) or in this case, immediate inspiration impels that the story just has to be recorded now.

Eric Hill has left the building… Well, he just left the (geography) room at the International Boys School Coalition Conference that’s happening in Melbourne at Scotch College all this week. I have just been witness to a man outlining a running program that Eric likes to call ‘therapy in disguise’. I have to say it was an honour to be present as a good man outlined a passion that he used to benefit others. 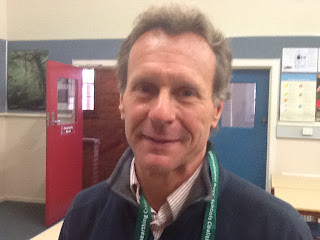 Now Eric is a serious runner. His students at school each year, after he runs in the New York marathon, ask if he won. He tells them that he probably couldn’t beat the winners on a bicycle. What is extraordinary is that this guy said that he has run the New York marathon for as many years as he can remember. We didn’t get a number – simply, it was that he has run the marathon for a lot of years. Witnessing him explain these interactions, it is so obvious that this man is role-modelling the value of persistence, the pleasure of finishing and working at, and reaching a goal.

I just heard him saying to a colleague as he left the presentation room, “Man, I am wiped out.” Remember this bloke is a runner. Eric was spent emotionally. Why? I suspect because he had just prepared and, put on the line, a significant account of the body of teaching work he has created over his time as a PE teacher at St Bernard’s Boys School in New York. He explained to our workshop cluster of about 20 people that, “at 11.25am, it was looking ugly.” What he is describing here is that feeling that workshop presenters get in the pit of their stomachs when the time to start approaches. This session was starting at 11.30am and he told us that virtually nobody had turned up with five minutes to go. I was one of the last ones in but by that time there where good numbers in to hear and see Eric’s presentation of his extraordinary work with his students.

So, the thumbnail sketch is that Eric, with a team of dedicated colleagues has built a running program that boys at the school can sign up for, regardless of their fitness levels or athletic ability. It happens during timetabled classes. They run in Central Park, around the reservoir, through the tunnels. They don’t just run, they do boy things like picking up sticks and having sword fights along the way. In the tunnels, of course a group of 30 boys make a holy racket and ensure that their shouting creates the full echoing boom effect as they yell their way through that part of the run. They run in the heat of summer and yes, they run too in the depths of winter, even when New York is under snow, he takes the kids outside for snowball fights. Eric Hill, who this blogger has never met before, outlined a career that I sense has a crucial underpinning… he has never forgotten what it is like to be a boy.

There are a page of scribbled notes here next to me full of Eric Hill ‘gold’. They come from this amazing video that a colleague put together about the program. There were beautiful quotations from students and what follows too, are the choice phrases I wrote down as Eric shared his vignettes.

From the boys one young man said that he enjoys the competitive elements that are available in the program but his deepest enjoyment came from “running, just for running itself.” I ask you, how often do our kids these days consciously articulate that they do something just because of the intrinsic value and enjoyment they derive from that pursuit? Standing out too, through the brilliant video story is student after student putting emphasis on the word ‘love’. Describing the experience of a race, one of the boys paused and said “I… loved… running in that race”…. as he said the word ‘loved’, you could see the boy’s smile matching the glistening in his eye.

The video concluded. The group broke into spontaneous applause. Eric then took questions about the program.

Here’s a few things he said.

“I don’t cut anybody (from the running program), I don’t care how slow you are.”

“We run with the kids.” Isn’t this a powerful metaphor for assisting young people through adolescence on their way to healthy adulthood?

Eric observed how the boys really ‘talk’ with each other when they are out running. They share things as they run alongside each other. Topics that would never be covered inside the four walls of the classroom. He observed that there was something in that ‘alongside’ talking… boys running and talking side to side seemed to help discussion that might be different eye to eye.

We heard about a boy in the team whose family, a few years earlier, had gone through a divorce. That boy’s mum told Eric it is the only time, when he is running or, gets back home from running, that she ever sees him smile.

Eric then put up another picture on the screen of a group of four boys in his charge. They were all smiling, beaming in fact after an inter-school event. One of the boys in the picture is the self-appointed chief distance measurer of the whole running group. You could see a little computer chip in his shoe. Eric would get reports from this boy’s iPhone after every session. These four young men were a relay team who had come fifth in a race with five teams.

These kids might have come last in their race but Eric proudly declared that that little team had “won just by being there”.

And for all the people in the workshop today, we won ‘just by being there’ because we experienced the delight and privilege of hearing a good man humbly sharing his story. A story that has ignited a passion for running and more deeply, a passion for living in a countless group of New York boys down the years. More power to you Eric.

As always, feel free to write your own thoughts in the space below.

Maybe you can give a ‘shout out’ for the person who has ‘run alongside’ you in your life.