The major block of colour is maroon. Boys in school blazers, in their hundreds, are crossing the street, streaming from trams and buses towards the requiem mass for Father John Carnie. Appreciate that the boys have been given the day off and the choice, by their school, to attend this funeral. Father John had been their chaplain at Marcellin College – a post he held for 25 years. I first met John just prior to him starting in this defining ‘work of his life’, when I was a young bloke in 1984, in Year 12 myself at another school. We became fellow team members of a youth community that ran Stranger Camps for young people. The essence of the experience was that the Year 12 students came from many different schools (hence the name ‘Stranger’) and had the opportunity to share their own story and hear the precious stories of others. A friendship started from there, despite our age difference. It lasted down the years even though we hadn’t managed to catch up much in recent times.

Whenever we caught up though, the little quips would start flowing like we’d seen each other yesterday… I could remember his old jokes and would get them in there, before he could say them, to his delight. John always laughed and said “you are like the Borbons” (his paraphrased reference to an old European royal house), “they didn’t know much but they never forgot”. As this Time & Space work grew, Marcellin embraced these experiences for their boys and parent community. That meant that I could catch up a bit more with John on his home turf. The last time I saw him was at a Time & Space for Stepping Up night at Marcellin in 2011. We stood together looking out across the 160+ Year 8 boys and their dads and mentors. John marvelled at how they were deeply engaged in one to one conversations, encountering things they might not have known in each others’ story. The shining faces reminded us of what we used to see over a quarter of a century ago on those Stranger camps. Here’s the last photo I took of John at a Stepping Up night. 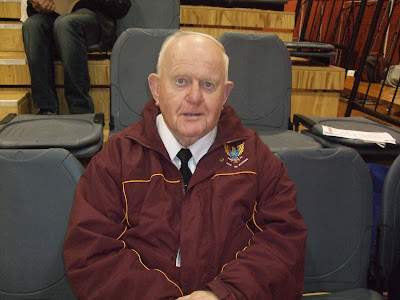 This is a classic John Carnie shot because it shows him (in his beloved Marcellin jacket) doing something he did brilliantly – ‘turning up’. He was famous for turning up or ‘gate-crashing’ as he liked to call it. The trust and rapport he had built was so high, that Year 12 students would enquire expectantly with him saying he was welcome to gatecrash their eighteenth birthday party on an upcoming Saturday night. Back in the 80’s when John was in his mid-fifties, I can assure you, he was gate-crashing back then. We loved him turning up to our parties. The mums and dads loved it. With his repartee the man was an ageless rock star!

The stories I have heard told by Marcellin boys, families and staff affirm the fact that he never lost his capacity to connect with people of all ages. A brilliant, quick wit… he had the ability to have the surliest teenager in fits of laughter. John’s swag of qualities was extensive and whilst he had that timeless capacity to connect with the current crop of students, it was his ‘old school’ traits, the way he went about what he did, that tell just as much about his commitment and care. Without fail – every year, I would get a phone call or a card on my birthday. A mutual friend got a phone call early in the morning every year for the last seven years on the anniversary of his mum’s passing. John used to joke I was the ‘Borbon’. I am telling you… he was the one who never forgot!

At Marcellin, John got into the rhythm of doing the same, ‘never forgetting’ for every boy at the school. There would be a knock at the classroom door. A student is called out and there’s Father John wishing many happy returns to that young man. He did this faithfully for 25 years. He interviewed every boy when he arrived in Year 7 and on the birthday classroom visit in Year 12, the young man would receive a card from John as well. He never forgot that the simple things are precious to people. As new technologies evolved, John embraced some that he could help him in his mission. He spoke with wonderment about the electronic timetable program that he could look up, to find where a student was at any given period, so he could go and make those birthday visits. The ‘remembering’ and John’s trademark effect of making each person feel special, had some replete ‘old technology’ methods underpinning it.

After he died in August this year, the College Principal, Mark Murphy and a colleague went to respectfully clear out his office. They found a filing card system so organised that the honour and care sang off every record. Little notes about the first interview with a Year 7 would describe a joke that was shared or particular dimension of the conversation that helped John to remember that special detail the next time they met. If a young fella was going through a tough time, a card might have an annotation like, “make contact in two months” and sure enough that card was filed with that date. The cards had lines through them when a new birthday greeting had been honoured. New notes were made for each meeting. In chatting to Mark Murphy, I got the sense of his appreciation of the incredible commitment and sheer hard work that was evident in John’s system.

So this master of remembering, of ‘turning up’ and old technology caused the most amazing crowd to gather at and pack out St Pat’s cathedral. The maroon blazers filled the vast sides in their hundreds. There were other young men, a bit older in their suits, all around where I was sitting and I noticed something in common that, like John’s birthday system, could not have just happened by chance. Each of them were wearing an Old Collegian’s tie. To a man, each had his ‘old boys’ tie on. How did they do it? I learned that one of them had utilised the technology of their generation, Facebook. On the Father John tribute page, one young old boy had put it out there to wear their Old Collegian’s tie. It had got hundreds of ‘likes’. They all turned up in their old school ties to honour the man who had turned up for them every day they were at school.

Priests, young people and Facebook all get their share of bad press. Obviously some of it is deserved (I would never minimize that) but surely sometimes the criticisms block out the good.

This post is being sent out at Christmas time. I can’t think of a better story to tell this year about a man who lived a sense of what Christmas is all about… every day.

As the story goes, a baby was born in a manger and in that moment humanity and divinity were combined. This was Father John’s life work, his delight, his vocation – he sought out the divine spark in every person he encountered.

Happy Christmas everyone… feel free to share your thoughts below.