Two personal highlights from 2011. They even contradict each other depending on the world perspective we take but there you go… this is the world we live in, going into 2012. I hope it is a good one for you and thanks for reading the blog this year. As always, feel free to comment, email or tweet a response.

Flying back to Melbourne from Sydney having attended a two day seminar learning some great content but also witnessing the presentation magic of the brilliant Allan Parker .

Have you ever had one of those moments where all was calm? You felt real peace? You’re inspired and quiet inside? I love getting a window seat in a plane. My head is leaning up against the perspex and this magnificent sunset starting to break out over the sky. I took this photo. 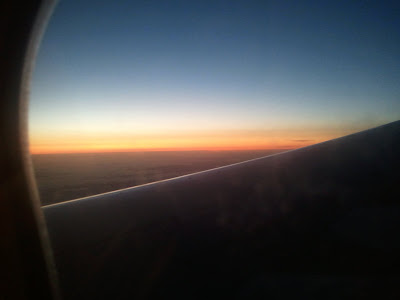 I had the earphones on, looked up and saw something on the in-flight TV Channel. Something of beauty (and relevant as this post goes up on New Year’s Eve). The subject of this video always gets a pretty good view of the fireworks on Sydney Harbour. I reckon you’ll enjoy this (especially if you’re a Nick Cave fan).

(n.b…. What I saw on the plane was this … the half hour documentary on the making of the clip).
Number 2 – Majority World Highlight

A response to last week’s post came in from the ‘majority’ world. It is an extraordinary world we live in when you consider a friend (and mentor) of mine opened up the blog in Vietnam. She emailed back…

Merry Xmas. Sitting in Saigon having early Brekky. It’s 6.30am here. Just
read your beautiful story. What a lovely way to start my Xmas day…

Saigon at Xmas is amazing. I have never seen so many crowds in the streets
last night… motorbike mayhem! Seems the Buddhists and Taoists are embracing part of the Christmas traditions.

… yesterday rode around on Cyclo – well I sat there while a man who was at least 101 years old peddled! This country is truly unbelievable. Asia and Australia are poles apart and I wonder who is the happier… we have way too much… convinced of that… that is way too much of what has no real value.

Love to you and your family on this Christmas day 2011.

My friend’s story evoked straight away, a memory of incredible generosity… received like her, as a visitor from the minority world to the majority world.

Go Back to Where You Came From aired on SBS in June. The ratings back up that it was a television highlight of 2011. The first episode trended as the number 1 discussion in the world that night on Twitter. We are a country divided on the issue of asylum seekers. The documentary was brilliant, it put six Aussies, all with views across the spectrum of the issue, into the shoes of the asylum seeker. They lived their story, only in reverse. Starting from the place of final settlement these people traveled back through detention centres, made a dangerous journey on a leaky boat, lived in transit countries and refugee camps before having the choice to go right back to the war zones from which people have actually fled. One resettled African family (on the link above, you’ll see a photo of the Masudi family in Wodonga) welcomed the participants in their home with a customary ritual. This sparked a personal memory.

When I saw this ritual, seven years fell away and in an instant I was transported back to the most humbling experience of my life. Below you see my two kids in 2004 in a village outside of Kampala. Now let’s list the ambiguities… I was on Long Service Leave and heading to visit the ‘in-laws’ in the UK (where they don’t have LSL). Dad was working in Uganda as a consultant, so I took the kids to visit him on the way. Dad’s work colleagues had the services of a driver, John. 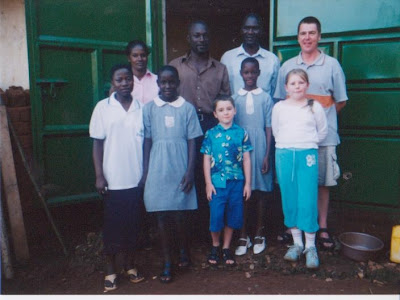 There is John standing next to me. His two girls are in the school uniforms. They showed their perfect copperplate handwriting in their school books to my kids’ astonishment. Down below in the bottom corner you can see a plastic basin and a water container.

Just like the Masudi’s did for their guests in Wodonga, John’s daughter, Joan, later places my hands over the bowl, pours water from that container over my hands and then dries them with a towel. A practical way to prepare for a shared meal.
A most profound ritual of welcome that remains the most gracious hospitality I have ever received. We shared an incredible meal of beautiful spicy pork pieces. John even bought in some soft drink for the kids, conscious how their stomachs might go with the drinking water. Dad explained that John would have spent a week’s wages on the feast. It was embarrassing but dad said to just ‘go with it’ as refusing would greatly offend. John and his family welcomed their guests by washing our hands, they gave all they had to a group of people from the other side of the world who by comparison, had everything.